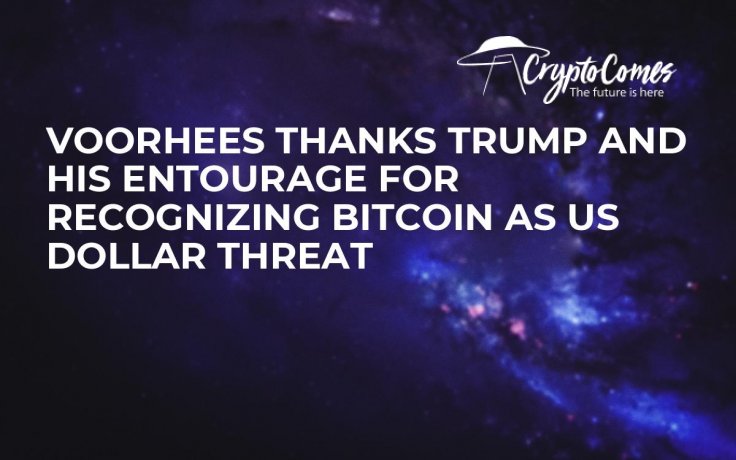 Thank you! And here we are only 6 years later and the President, Treasury Secretary, and Fed Chair all discussed Bitcoin publicly in one week. I think they are finally starting to realize that Bitcoin as money is an existential threat to the US dollar. #SoundMoney https://t.co/fhzX8NiKZY

On his tweet, Voorhees attached a video of his performance at the Bitcoin 2013 Conference in San Diego.

The most important part of Voorhees’ message is that after 6 years, senior officials still started talking about Bitcoin, regarding him as a threat to the US dollar.

Recall that last week, US President Donald Trump for the first time spoke about his negative attitude to Bitcoin and cryptocurrency.

President's concern was picked up by Steven Mnuchin and Jerome Powell, who are actively monitoring the situation around Facebook Libra.

And here is what Mnuchin said about cryptocurrency at a press conference on July 15:

Cryptocurrencies such as Bitcoin have been exploited to support billions of dollars of illicit activity, like cybercrime, tax evasion, extortion, randomware, illicit drugs, human trafficking … This is indeed a national security issue.

What’s next for Bitcoin?

Already today, in the Banking Committee of the United States Senate held a hearing on the project Libra. Depending on what the Facebook representatives say, the mood of the officials will depend. And we just have to wait for the news.