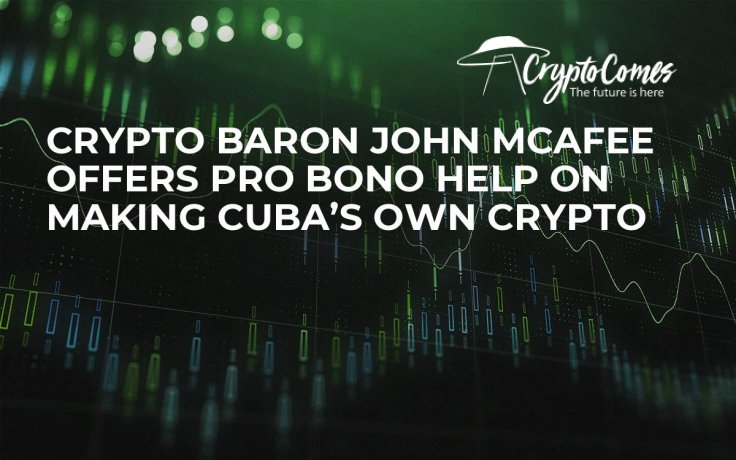 The notorious crypto baron John McAfee has been fleeing from the IRS and first stayed in the Bahamas and now has moved to Cuba for fear that the CIA has struck a deal with Bahamas’ authorities to extradite him.

Now, apparently seeing Cuba as a perfect venue for crypto experiments, he has decided to support their interest towards making a native state crypto and has offered his technological skills to them to help pull off this venture.

Recently, the media reported that the government of Cuba has expressed interest in creating their own state crypto coin to beat the economic sanctions laid on the country by the US President Donald Trump.

Reuters reports that McAfee has offered Cuba his help in the development of the coin. What is more, he said that the project is not only promising but also so simple that he offered his help in guiding them free of charge.

Cuba is planning to use Cryptocurrency to get around the 63 years of economic strangulation imposed upon 14 million Cuban people by the insanity of the US Government. Finally, a large scale, real world application for Cryptocurrencies. If Cuba wants my help, I am here. pic.twitter.com/zgHUNwRcdE

It seems that Cuba has taken an example of Venezuela in creating their Petro pegged to the local oil deposits, though many experts believe that not everything declared about Petro is true, including the amount of oil that is announced to back it.

Why Petro has failed per McAfee

McAfee, though, simply believes that the problem of Petro exists because people expected to much of it from the very start.

As for a way that crypto can actually save Cuba, he stated that the future coin must be built on the right DLT and adopted to the specific requirements that Cuba is facing due to the current situation in the local economy.

McAfee mentioned that he had offered the Cuba’s government to provide his guidance via Twitter. However, Reuters writes that the authorities have not replied yet.

McAfee trusts his safety to Cuba

McAfee is certain that Cuba will never extradite him to the US and the situation that took place with Julian Assange in London will not happen to him.

He also plans to use Cuba as base for running for US presidential chair in 2020.