In his recent tweet, Wietse Wind shared the conditions of the XUMM translation bounty. XRP community members can help in three ways: by proposing the translation, by making corrections to other participants' proposals and by voting for the best versions of the translation. 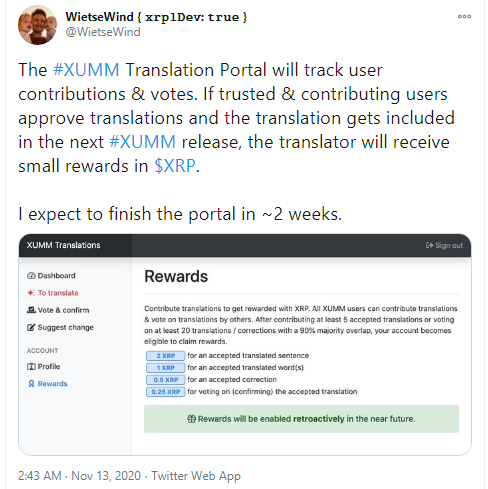 To receive XRP, "trusted and contributing" users need to have their suggestions included in the next XUMM releases. Mr. Wind expects to finish this project in the next two weeks.

The maximum prize (2 XRP) will be awarded to the author of the accepted translated sentence. Those who propose the best version of the translation of a single word can earn 1 XRP. A total of 0.5 XRP will go to the contributors whose corrections are accepted, and 0.25 XRP will be sent to active voters.

To have his/her address included in this program, the user needs to contribute at least 5 accepted translations or to vote for 20 accepted corrections with a 90 percent majority overlap.

Where do the most active XRP soldiers live?

Mr. Wind stressed that every XUMM user can broadcast his/her translations directly to the already-installed application. The mechanism automatically picks up translated strings from the GitHub repository.

The aggregated reward for one language version of the XUMM wallet is set at approximately 950 XRP based on the actual quantity of strings in the application.

Finally, users can add their language if they do not find it in the list in GitHub. At press time, users from the Russian Federation, the Czech Republic, Sweden and Greece are among the most passionate contributors to this community-driven initiative.

Developed by XRPL Labs, XUMM is a very popular noncustodial XRP wallet. As covered by CryptoComes previously, it was the first decentralized on-chain wallet to allow XRP holders to claim Spark tokens seamlessly in the upcoming airdrop on Dec. 12.