Facebook Twitter Telegram Copy URL
Flare Finance, the pioneering DeFi protocol based on Flare, will share the latest updates on its progress in an online "ask me anything" session
Cover image via stock.adobe.com

Flare Finance is the first ever multi-purpose protocol that will leverage the potential of Flare, XRP Ledger's much-anticipated "utility fork." It will host an AMA session on Oct. 31.

According to the official announcement shared in a recent tweet by the WeBlock blockchain development community, an AMA session with Flare Finance founders will take place on Halloween. 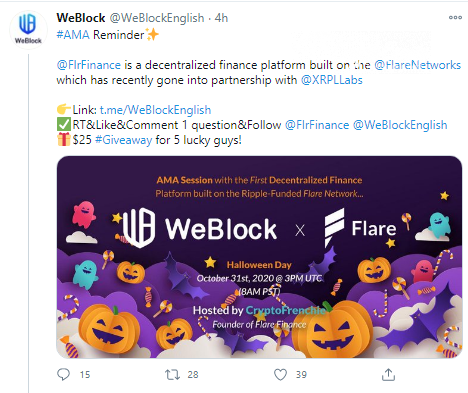 Every member of the social media communities of Flare Finance and WeBlock is invited to participate in this AMA by sending questions to guests via WeBlock Telegram. Five lucky participants in the AMA are eligible for a commemorative airdrop.

As covered by CryptoComes previously, three weeks ago, on Oct. 7, the first ever decentralized financial protocol unveiled its plans to build on top of Flare.

According to its team announcements, Flare Finance will have a decentralized exchange (DEX), a stablecoin and yield farming tools under its umbrella.

No, Flare Networks is not a project of XRPL Labs

However, there were some inaccuracies in the AMA announcement. Flare Networks, the organizers of the first XRPL-based smart contract platform Flare, decided to make things clear:

Please be aware however that Flare does not have a partnership with @XRPLLabs.

It should be noted that Flare Networks will launch Flare, a smart contracts platform on XRPL, in Dec. Prior to this major release, Flare will distribute Spark tokens 1:1 to all XRP holders who claim the new asset.