With a new tool released by Xrplorer.com, the resource tasked with the analysis of XRP Ledger transactions, disclosing XRP scams becomes easier than ever. Even users with no blockchain skills can trace suspicious remittances and expose their possible beneficiaries.

XRP Ledger transactions at your fingertips

In a recent tweet, the team at Xrplorer shared details of their newly released tool. An XRP holder just needs to input the hash of the suspicious transaction to de-obfuscate the possible path of XRP tokens. 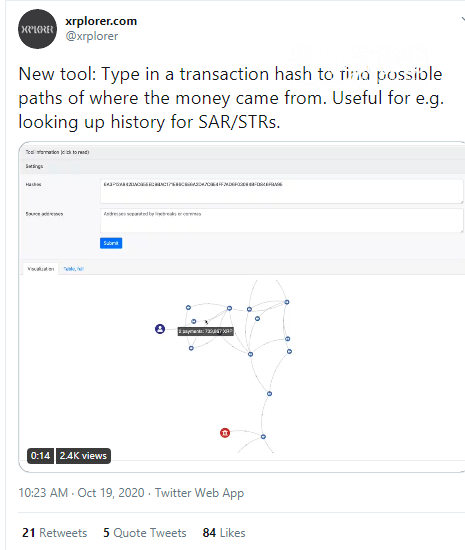 The new tool shows recent participants in transactions that interacted with the tokens in question. The Xrplorer team admitted that their instrument does not provide the accurate "path" of every single fraction of XRP tokens. Thus, only "possible" transaction receivers are displayed:

In a short demonstration video attached to the tweet, a user who decided to check the roots of the XRPL transaction is provided with a scheme that displays the "paths" of coins and the list of wallets involved.

Primarily, this instrument attempts to solve the problems of suspicious transactions and suspicious activity in XRP Ledger.

XRP scams will have a hard time

Most likely, this instrument will set new XRPL enthusiasts on the warpath with blatant XRP scams: fake airdrops and giveaways, money laundering, phishing software, etc. In 2020, XRP scams have reached a new level of complexity.

As covered by CryptoComes previously, in July the scammers created a fake newsletter on behalf of Coindesk crypto media outlet. This newsletter informed all XRP holders about the mysterious "reallocation" allegedly launched by Ripple Inc. Those who decided to take part in this event were redirected to phishing websites.

Recently, XRP Forensics, a side project of Xrplorer, unveiled the average profitability of running one "YouTube XRP scam airdrop." Malefactors can raise approximately $60,000 in a single day from gullible "investors." Unfortunately, the scammers have learned how to launder their loot even with top-tier exchanges, such as Binance or Crypto.com.